So, in an effort to branch out from merely reviewing books to interacting with them, stay tuned for BLOG POSTS OF A DIFFERENT COLOR!

Welcome to Top 10 Tuesday!  Going forward, Tuesday posts will feature everyone's favorite thing: LISTS!  (Don't look at me like that - you know you love them.)  As a reader, I fully embrace lists as one of my greatest tools.  I have lists upon lists for everything - favorite characters, favorite series, TBR books, etc. - it's how I order my reading and writing life (and make sure I don't forget things).  Lists = life.

I thought I'd start out with something I've been thinking about a lot lately, in crafting the hero of the story I'm working on: what makes a hero?  So I started - you guessed it - making a list of attributes.  Then I started assigning those attributes faces.  And that led to... duh-duh-dummmmm...


TOP 10 SIGH-WORTHY HEROES
(In no particular order, because seriously, how can you choose?)
Most of these dudes have been depicted in film (some of them many times), so I've included pics of my favorite incarnation of each character.  And if you disagree with me, I have no problem fighting you.  (Or holding a semi-civilized discussion about why you're wrong...) 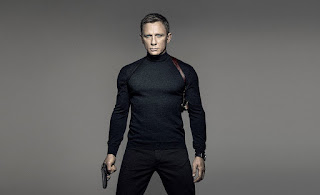 (Casino Royale and subsequent titles by Sir Ian Fleming)
Girls, gadgets, guns, and martinis - these are the things that come to mind when I think of Bond.  A man with good intentions (most of the time) and dangerous memories, the suave, ruthless spy is as close to the perfect man as one can get - if you like that sort of thing.  He's brave and well-traveled, and, apparently, knows how to do everything - from snow skiing to scuba diving to flying a space shuttle.  Not a bad guy to have around in a tight spot. 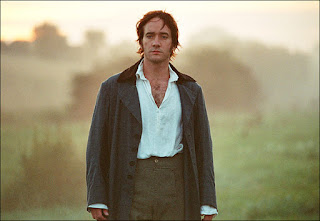 (Pride and Prejudice by Jane Austen)
What's more attractive than an arrogant man with a title, who wears an air of mystery like a cloak?  One that's good at hiding his feelings in an attempt at self-preservation, and adds to his already enigmatic aura.  That said, any man who is willing to buck societal conventions for love deserves mad props, even if his initial declaration of love is a bumbling mess of unintentional insults.  Anyway, he totally redeems his early missteps with his gallantry when Lizzie is in need, which shows his true character. 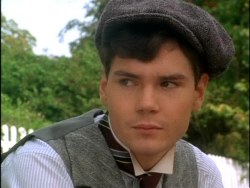 (Anne of Green Gables by L.M. Montgomery)
Oh, Gilbert, bless his heart.  He is tragically under the opinion that teasing a girl will make her like him...  However, he shows serious resolve when even getting a slate broken over his head doesn't deter him.  He grows up to be brilliant, witty, and adorably handsome.  One of the things I like most about Gilbert is his loyalty and selflessness.  He is not put off by Anne's coldness, and is willing to make sacrifices to help her.  Not only that, but he loves her for who she is, not who he wants her to be - something that is rare, and lovely. 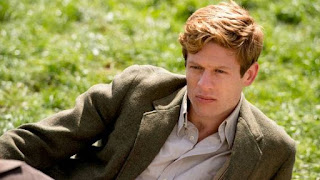 (Grantchester mysteries by James Runcie)
There is something about this lost and wayward clergyman that absolutely makes my heart go pitty-pat.  He is 30% man of the cloth, 25% amateur detective, 25% hard liquor-swilling damaged soldier, 10% dog lover, and 10% jazz expert.  And he even looks awesome riding a bike in his Sunday best.  I think part of what draws me to Sidney as a character is his broken psyche, and the fact that he struggles with how to reconcile his past deeds with his current role as a spiritual leader. 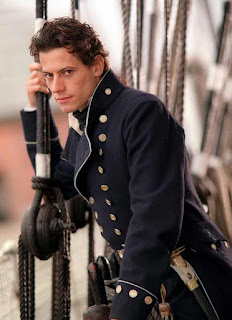 (Beat to Quarters and subsequent novels by C.S. Forester)
A sailor with a sense of duty and honor, who can handle a pistol and a sword at the same time while climbing the rigging of a ship?  Ahoy!  One of the things I like best about Hornblower is his mind.  As he makes his way up the ranks of the Royal Navy, he is faced with crises and seemingly impossible situations aplenty.  Does he panic? No.  Does he run from danger?  Definitely not.  He uses his wits to get himself and his crew out of danger, if not in strictly by-the-regulations ways. 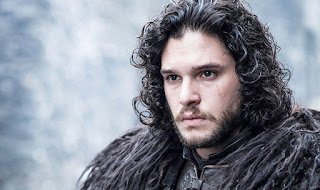 (A Game of Thrones and subsequent novels by George R.R. Martin)
Honor before anything, except family... Technically speaking, my favorite Westrosi son is still dead (if we're only discussing the books).  But that doesn't stop the captain of the Night Guard from being awesome.  There's also the fact that he's the black sheep - the shame - of the Stark family (or so everyone thinks), an indication of Ned Stark's one dishonorable act, but that doesn't stop him from embracing his Starkness.  Perhaps, ironically, the most worthy to carry on the Stark name, Snow stands for loyalty and duty in an attempt to uphold the Stark reputation. 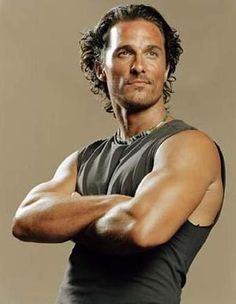 (Pacific Vortex! and subsequent novels by Clive Cussler)
Perhaps my first literary crush, Dirk Pitt is the quintessential adventurer/explorer (sorry Josh Gates, but you just don't stack up).  This former Air Force officer loves danger, the sea, and classic cars (not necessarily in that order), and swings in and out of danger like it's on his agenda.  AND he lives in an old airplane hangar.  How awesome is that?  Pitt is a world traveler who has no problem staring the bad guy in the eye and laughing while he pushes the button on a remote detonator to blow something up.  He's like an awesome mix between Indiana Jones and MacGyver with a boat. 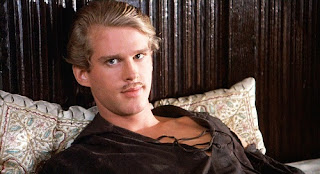 (The Princess Bride by William Goldman)
This farm boy-turned pirate never swerves from his devotion to his love, Buttercup, and does everything in his power to see her safe.  He's brash, arrogant, and clever - something that makes him both a most dreaded pirate and a dangerous adversary.  I love that Westley has such humble roots; he starts out as a farm hand, and ends up ruling the high seas.  It's an awesome reminder that anyone can overcome a particular set of circumstances if they put their mind to it.  Oh, ALSO, he survives being mostly dead. 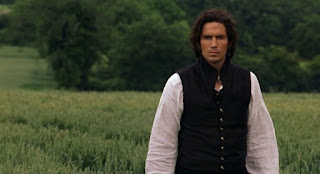 (The Count of Monte Cristo by Alexander Dumas)
Betrayal! False accusations!  Mistaken identities!  And, above all, REVENGE!  Rawr.  The sheer cold calculation that Edmond Dantes possesses, to wait literally YEARS, until just the perfect moment to exact his revenge upon the Count Mondego for stealing his life and his love is clap-worthy.  And such complete revenge; he leaves nothing to chance, forgets nothing, is ten steps ahead, always.  And he ends up getting the girl and the son.  Whew!  And, if that's not awesome enough, one of this aliases is Sinbad the Sailor.  (Do with that information what you will.) 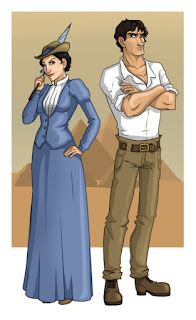 (Amelia Peabody mysteries by Elizabeth Peters)
I <3 Emerson.  If there was one man on this list I could take home in my pocket, it would be Emerson.  He is a bad-tempered, hot-headed reactionary with a habit for swearing at inappropriate times and shouting, who shoots first and asks questions later.  No, for serious.  I really do <3 him.  He's real.  He reacts to danger like a person should - with a mixture of fear and bravado, while considering how it will affect his family (which includes not only his blood family, but those he considers family).  He's a no-nonsense kind of guy who doesn't put on airs for anyone, even when a little bit of tact could get him exactly what he wants.  (I feel compelled to admit that I may possibly have also just described my husband.  Apparently, I have a type.)  He's completely devoted to his wife, Amelia Peabody (and he's totally OK with her keeping her last name), and recognizes her as his partner, not his trophy, and doesn't try to stop her from doing ALL THE THINGS.  He just makes sure her pistol is clean and loaded.  All the love for Emerson.

RUNNERS-UP
(Because how can there only be ten happening hotties?)
Colonel Brandon 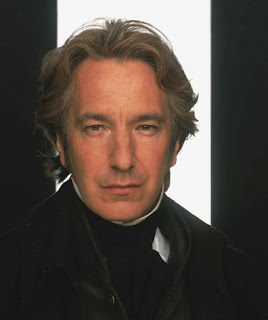 (Sense and Sensibility by Jane Austen)
This guy, though.  This brave and honorable army officer, who has inherited his family's estate, is reserved and humble in spite of his tumultuous and scandal-ridden background.  He steadfastly loves the overly-emotional Marianne Dashwood through her infatuation with the tragically weak and shallow (and, incidentally, not on this list) Willoughby, supports her unconditionally, and does everything he can to help her and her family.  He sees past her childish actions, loves her for her pure heart, and ultimately shows her that she deserves more than she even thought for herself. 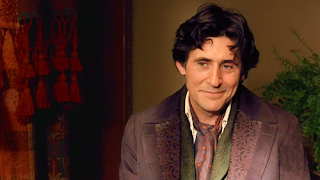 (Little Women by Louisa May Alcott)
Though the German expat may not be on everyone's list of sigh-worthy heroes, he makes mine because he's an adorably bumbling scholar with a sense of honor, who is humble and loving, and is reliable.  At first glance he may seem a little, well, boring, but I say NONSENSE to that.  He's merely brilliant and considering.  And I commend Jo for being open-minded enough to see him for the treasure he is.  And he not only loves Jo, but appreciates her and holds her in high esteem, as she deserves.  And I believe he is the best partner for her. 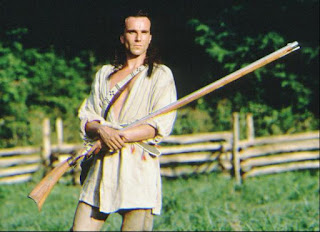 (The Last of the Mohicans by James Fenimore Cooper)
He's a dead shot raised by Native Indians, and is at home in the wilderness, and probably knows how to wrestle bears.  He is a protector, puts himself at risk to rescue Cora, the woman he loves, only to see her killed, and afterward joins the resistance against the tyranny ultimately responsible for her death.  This man stands up for his principles, and will not hesitate to remove things that stand in his way, or threatens those he loves. He ain't got time for that.

And there you have it!  Top 10 lists are fun!  (But also stressful because only 10?) Especially when they're as pretty as the entries on this one.

Upcoming: I've just finished two fabulous books: Shadow and Bone, book one of Leigh Bardugo's Grisha Trilogy (all hail the Darkling!); and The Dark Days Pact, book two of the Lady Helen series by Alison Goodman (did NOT see that one coming).  Reviews to follow!
Posted by Unknown at 1:30 PM